An obsession with peanut butter cookies, and his mom’s admonishment to stop making them daily and cook something else, set Kevin “Steek” Cooper on the path to culinary success.

His early kitchen exploits led to him becoming the go-to guy to cook for family events, which gave him the courage to keep going. “I knew I wanted to be a chef; I just needed to get confidence,” he said.

A three-time winner of different Food Network contests is proof positive that he’s got what it takes. We spent some time with Drexel Hill’s Chef Steek to hear about his amazing journey from peanut-butter-obsessed kid to Chicken Guy franchisee. 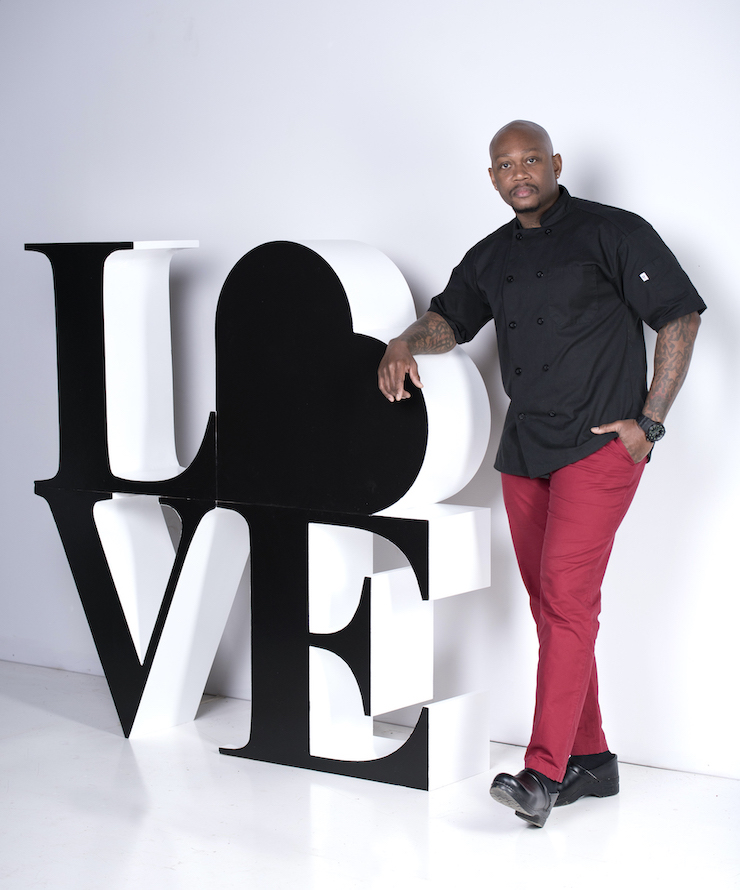 Let’s start with the first question on everyone’s mind: Why “Steek”?

Believe it or not, my mom called me “Stank.” As luck would have it, when the twins were born they couldn’t pronounce it and started calling me “Steek” — and that stuck. I prefer it, because no one wants Chef Stank to cook for them!

We see you’re a Food Network veteran! Tell us about it.

My first contest was 2017 Cooks vs. Cons — and I almost got sent home after the first dish. I made it through, and my second dish wowed the judges. I learned a lot on the way to winning.

Next, I was on Fire Master on Food Network Canada in 2018, but it didn’t air until 2020. I didn’t win that one, but it really taught me how to play to win on these shows. My dish was the most flavorful, but I didn’t play the game according to the rules. Big lesson: Listen to the rules of the game you’re playing.

Then, I was lucky enough to get on Guy’s Grocery Games … which we filmed at the same time as Guy’s Chance of a Lifetime! Four of us from Guy’s Chance of a Lifetime — me, Chase Davis, Eboni Henry and Chelsea Sargent-Lira — were doing the crazy run around the supermarket game. It was not easy: We had 30 minutes to shop and cook the dish. I won, and I love that show. I’d love to experience it again. 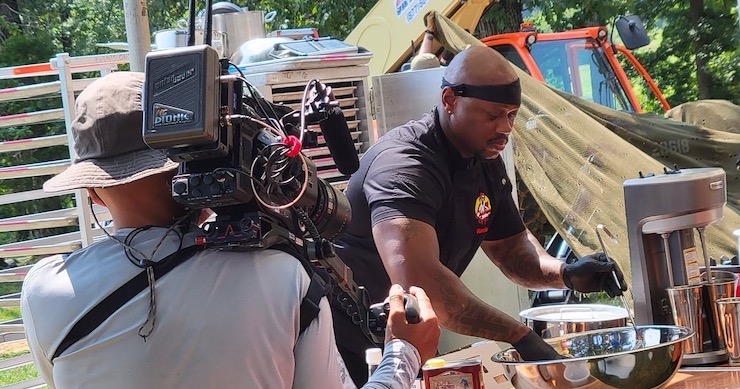 Before we get to the “Lifetime” contest — tell us how you got here.

I did a number of things, all leading to this moment. I was in the active duty Army for 7 years, then spent 6 years in the National Guard. I was a staff sergeant, and my last drill was Jan. 20, 2022.

I mostly worked in logistics, from truck driver to administration. I was stationed throughout the United States, and some outside of the country. My recruiter advised me to try something different, to hone in on what I wanted to do. Those experiences gave me confidence and discipline. I always liked to cook, so I cooked for my battle buddies overseas; just invited them over and cooked a little meal.

Near the end of my Army service I was stationed in Tacoma, Washington. My commander allowed me to work at Outback Steakhouse. I really needed to do something in the food world, and he supported that. 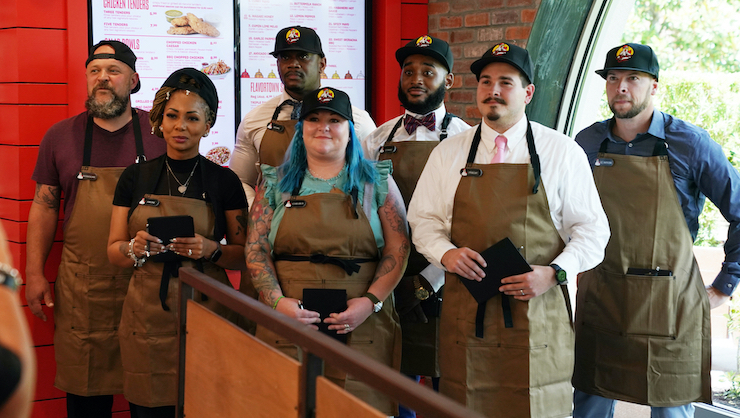 You attended culinary school, and graduated as the valedictorian — congrats!

I’d always been a good cook, but I wanted to get a degree in the rest of the field. I went to JNA Institute of Culinary Arts in Philadelphia and got a degree in restaurant management and culinary arts, graduating in 2018. That experience really humbled me; I learned so much. You can’t put the food world in a box — it’s an art, a real art form.

What kind of restaurant experience do you have?

I’ve been around the block! I started at 14 in a pizza shop, doing wings and fries and things like that. At 16, I started serving tables for an assistant living location. From there I went on to work at and manage a Wendy’s. That experience will be quite helpful at Chicken Guy.

I worked at Harvest, the Ritz Carlton, and then got a job as the executive chef for Discover Card Services. There I executed events for up to 1,200 people — holiday events, Thanksgiving dinners, even daily employee lunches. I also was in charge of ordering and supervising the other chefs. This was pivotal as I was put in a position to learn to run a business.

During the early part of the pandemic, you took a job at Paul’s Run Retirement Community in Philadelphia. How did that come about?

You know, when the pandemic shut everything down, the restaurant industry took a big hit. I saw this Paul’s Run opportunity, and it was a wonderful option. I was there from February to December 2020, and that meant I had the chance to help make a difference for the residents. They went from dining together to dining alone in their rooms. Our goal was to deliver upscale hotel room service.

We put together a nice continental breakfast, lunch bags and dinners. We not only accommodated dietary restrictions, but made it our business to accommodate special requests. We made sure to celebrate birthdays and anniversaries, because during quarantine one of the things that made our residents happy was food. So we made sure it was the best quality food possible to make people happy.

You started your own company, Succulent Imagination, in 2016. How did that fit in over the years?

I started that to provide in-home cooking lessons, entertaining demonstrations, plus personal chef services. Needless to say, that became challenging in the early days of the pandemic; thankfully, that’s come back. Part of the reason I left Paul’s Run — which was really bittersweet — was to focus on my own business.

Since you seemingly have no spare time — how did you manage a cookbook and a line of wines?

Everyone was stuck at home during the pandemic, getting real sick of eating the same things. I wrote Simple Upscale Dining at Home so people could make easy, restaurant-quality meals at home. The book also encourages readers to set the vibe with candles, plates and glasses. It was a challenging time, but little touches like that really helped.

I do have a wine label, KC Wine Collection. We focus on malbecs and old vines zinfandel. 2021 will be our first vintage!

OK — Guy’s Chance of a Lifetime! That must have been some experience.

Believe it or not, I was casting for a Netflix show when I got the email for Guy’s Chance of a Lifetime. I was 75% through the casting process, but I just had the gut feeling that Guy’s show would be right for me. I mean, it’s Guy Fieri! I did the Skype interview, then the next phase — and then I got the call for Netflix. It was like a magnet pulling me toward Guy’s show; the decision became easy when I prayed on it. And, I got the call that I was in.

What was it like to get the call for the show?

It was everything: fun, good times, bad times. I got the show and had to leave in four days. It was then we learned my wife, LaToya, had cancer. We figured how to balance that out, have family members help her and my daughter. I felt like going through all those emotions put me in a position to see how I’d react under every circumstance.

And then, right after we started filming, my sister Kevisha died. I mean, that was a lot. I think back on how I was able to handle it, but I was able to rise to the occasion. All the strength comes from God, not from me.

Did you ever “have a feeling” that you were about to win?

There were times when I felt I’d done well, and thought I might win, but the other candidates had amazing qualities. It was anybody’s game to win, and everybody’s game to lose. And, you don’t know what the judges are seeing, either. So I just took a step back, gave 110% and let the outcome be the outcome. 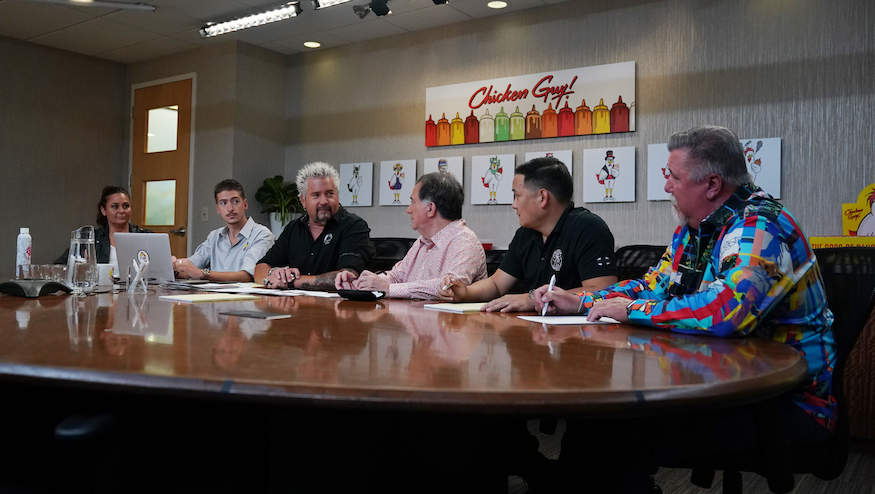 How did it feel to win?

Amazing! I cried; I was holding back tears from everything that had been going on. I was like, “OK! It’s done and I did it!” I was happy, grateful and ecstatic.

I grew up in North Philly in the ‘hood, where a lot of people don’t know where they’re going. I’ve been put in a position to inspire others and I intend to do that because it’s never about where you’re coming from; it’s always about where you’re going.

I’m also very grateful to say that my wife’s last treatment was in January 2022. 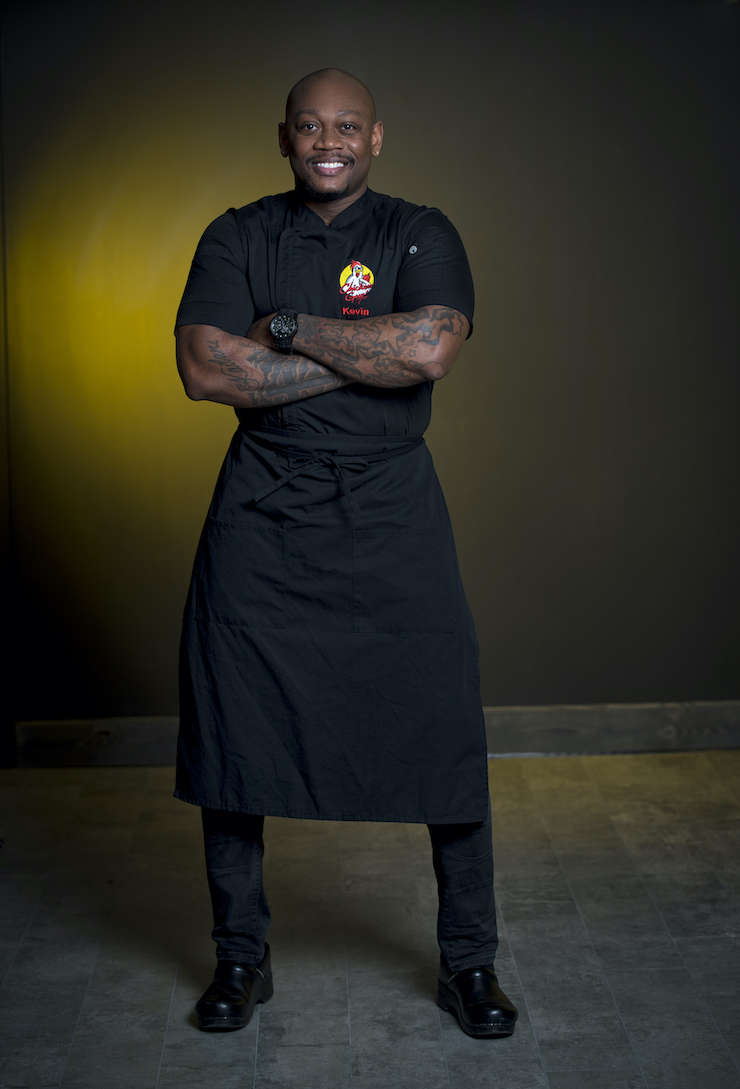 Tell us what’s next — where and when will the Chicken Guy open?

We’re working on it! We don’t have an exact date or location. But it’s in the works and we’ll let you know.

I would like to leave one phrase of encouragement here, something I’ve learned over time.  When the sun is shining on you, don’t ever look for the shade. Bask completely in that light.

Want to know more about everything Delco? We’re more than just your source for good eats — we’re your source for where to stay, what to do and more in Delaware County, Pennsylvania. We’re Visit Delco, PA, and we’ve got you covered from Philly to the Brandywine. Contact us at (610) 565-3679, by email, or online.